skip to main | skip to sidebar

A punch at the UN

United Nations Headquarters, New York, 6 Dec 1971- During a discussion in the UN General Assembly , Saudi Arabia's Ambassador Jamil M. Baroody who wanted to speak immediately after Israeli Foreign Minister Abba Eban, rose and began a speech. After Baroody was ruled out of order because he was speaking out of turn, UN Undersecretary for General Assembly Affairs Constantin Stavropoulos left the rostrum to confer with the ambassador. Baroody, however, was not in a talking mood and threw a right cross to the chin of Stavropoulos which the latter neatly blocked. The newspapers next day carried photographs of the incident. [From newspaper reports - December 7, 1971 ] 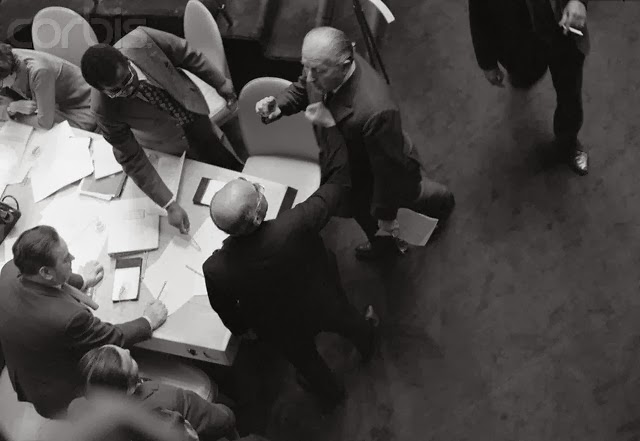 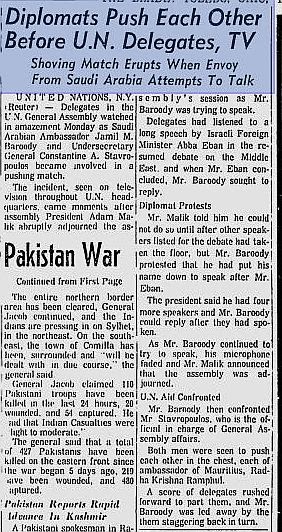 Local newspapers and TV had a field day reporting on this incident, and making snide remarks about the boxing prowess of the two persons involved. One paper carried a photo of the incident on its sporting page! But on a serious level, at UN meetings, the Chair has to take care that those who want to speak are given the opportunity, and in the order in which they make the request. Sometimes, especially with delegates sitting in remote parts of the room, it becomes difficult. Tempers can rise, if delegates feel they have intentionally been snubbed by not being recognized. In this case, Ambassador Baroody was a well-known figure on the UN scene, and not being given the floor must have incensed him greatly. Diplomats are human, after all !
Posted by Bhaskar at 11:52 PM No comments:

The roots of diplomacy...

The word “diplomacy” comes from the Greek word "diploma" διπλομα, which literally means 'folded in two'. In ancient Greece, a diploma was a certificate certifying completion of a course of study, typically folded in two. This must have evolved further. Messages from the sovereign ruler to another were obviously very important and needed confidentiality, discretion, and special treatment.

During the Roman Empire, the word "diploma" was used to describe official travel documents, such as passports and passes for imperial roads, that were stamped on double metal plates. Later, the meaning was extended to cover other official documents such as treaties with foreign tribes. In the 1700s the French called their body of officials attached to foreign legations the corps "diplomatique". The word "diplomacy" was first introduced into the English language by Edmund Burke in 1796, based on the French word "diplomatie".

From this it seems that the business of carrying a message folded into some kind of envelope was the original function of a diplomat. Today, the three things, the message, the container, and the act of conveying it to its destination, have all evolved considerably into many variations and diverse forms. From this starting point, the world of diplomacy can be explored, and its impact on the lives of ordinary citizens assessed.
Posted by Bhaskar at 11:41 PM No comments:

What's this blog about

Anything that relates to diplomacy, foreign affairs, serious as well as the sometimes ridiculous and hilarious situations that diplomats get involved in, etc.
An amusing or thought-provoking incident that involved diplomats, and your impressions could be interesting.
Posted by Bhaskar at 10:55 PM No comments: